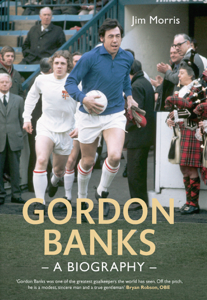 Passion for football in England shifted in the second half of the twentieth century. Around 40 million spectators entered the turnstiles at the peak of the 1948/49 season. In the years that followed, the attendances varied but the football only got better, leading England to win the World Cup in 1966. There were a number of great players that graced the pitches of Great Britain in the 1960s and 1970s. This book tells the story of one of them. Gordon Banks is still regarded as England s finest ever goalkeeper. His club career took him to Chesterfield, Leicester City and Stoke City. He was paid £2 a match at Chesterfield, and his transfer from Leicester to Stoke was for £50,000 well below some current Premiership players wages today! Capped seventy-three times by England, Gordon went on to lift the World Cup as England s goalkeeper and make arguably the save of the century in Mexico in 1970. The youngest of four brothers from Sheffield, Gordon abandoned plans to become a bricklayer when Chesterfield came looking. He was later to marry and have three children. As television allowed fans to watch from the comfort of their own living rooms or the pub, Gordon Banks was ever present, and he remains much admired and revered to this day.1